Like tuning, changing strings is a necessary evil! Let’s talk about what to aim for and what to watch out for, as you change strings. We’ll start with the 7 Ideas to Keep in Mind, talk about How to Change Strings, and then go into the Whys & Wherefores for those interested. 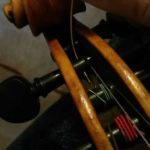 7 Ideas to Keep in Mind

1. Change only one string at a time – the bridge can actually fall down if you take all the strings off at once*.  Of course, if you break a string, you may only need to replace that one.  Try not to let strings go longer than a year before changing them — you may not notice them losing their vigor but you certainly will notice how nice they sound when you change them!

2. Roll the strings neatly onto the correct pegs, with one layer of string**. The more neatly the string is rolled on, the more likely you’ll have enough space to roll the string on without allowing it to cross over itself.

3. Each string exits the peg from the top*** (the way most people do with toilet paper rolls!) so that turning the peg away from you makes the string sound higher, and turning it toward you makes it lower.

4. End up with each string as perpendicular to the peg as possible****.

5. Never allow a string to bend sharply or kink at any point.

6. Avoid holding the string at the place where your bow will be playing, if at all possible.

7. As you take each string off, clean the fingerboard that was under that string, with a lint-free cloth. Also wipe off the area around the feet of the bridge.

How to Change the Strings

1. To remove the old string, start by unwinding the peg. Pull it completely off the peg, and unhook it from the tailpiece.

2. Thread the ball-end or loop-end onto the tailpiece or the fine tuner.

4. Keep hold of the string to provide some tension as you turn the peg away from you, and carefully wind the string onto the peg. (I like to start by winding it once on the side away from your hand and then back toward the hand, so it winds over the little tail of the string and secures it). Coil the string neatly toward your hand in one layer. Keep some tension on the string or it will loosen and coil haphazardly. As you’re doing this, if the other end of the string, at the tailpiece, comes loose, hang on to keep tension on the string so you don’t lose all your winding work on the peg, and feed the tailpiece end into place again so you can continue winding up the string.

5. Tighten the peg to approximately the right place, or a little low, to avoid putting too much pressure on before you’ve got all the strings on. You can use an electronic tuner to get roughly to the right note or a little lower, or compare the sound with the other strings. Never let go of the peg until you’ve “screwed” it in while turning, so it stays tight. See the article about Tuning for more details.

Remember that most strings need a little stretching before they become stable.  In other words, you’ll probably find that new strings go out of tune and require a few tunings before they stay in tune.  Normally they stretch a bit and go low, and have to be tuned up.  Be sure to review the article about Tuning!

Final note:  every time you tune, and especially when changing strings, the pressure of tuning the strings up pulls on the top of the bridge, and eventually the bridge can lean forward.  This is not good for two reasons — one is that if it keeps leaning forward it can eventually warp in that direction, which weakens the wood of the bridge, potentially causing it to snap under pressure.  Second, if the bridge leans, the feet are no longer seated in full contact with the top of the violin, so they don’t transmit the full sound into the body of the violin, affecting your sound.  If after changing strings, the back side of the bridge (the side toward the chin rest) is not vertical, carefully grip the top of the bridge with both hands, between G & D strings, and between A & E strings, and slightly tug it back so it is straight, a tiny bit at a time.

*Why one string at a time? – Both the bridge and sound post (inside the violin under the bridge) are kept upright only by the pressure of the strings (about 42 pounds per square inch). The bridge can be put back up if it falls (highest side is on the G-string side, and if there are no marks on the violin to show where the bridge used to stand, you can place it between the notches in the f-holes) – but if the sound post falls down, it’s bad for the instrument to string it up again before you have an expert with a sound post tool set it up properly. 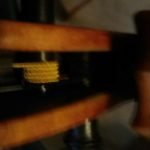 **Why roll the string neatly and in one layer? – If the string crosses over itself there can be unnecessary friction as you tune the string over and over. This can rub the threads or metal and creating a weak spot, where the string could potentially break. The rubbing could happen on the same string, or it could get in the way of a string that crosses above that peg (such as the D string, which is physically higher than the A string in the peg box and could rub against a carelessly strung A string). You can help neaten the coils of the string as you’re winding it up if you keep tension on the string, loosen the peg slightly, and pull it slightly out to push the coils of the string neatly together before continuing to wind the string, kind of the way knitters or weavers do to tighten their stitches.

***Why the string has to come from the top of the peg? – It’s the most direct path to the nut and the playing area. Every extra bend and pressure changes the sound. Also, a string coming from below the peg will probably rub against another peg, causing friction and making the sound of one string change when the other is tuned.

****Why the string needs to be perpendicular to the peg? – The D and A strings can be coiled up so they end up perpendicular to the peg and exert no sideways pressure on the peg. If they’re crooked they could push on the peg and cause it to loosen, depending on weather and humidity. Note that the G and E strings, coming from the outer sides, can’t be totally perpendicular but we try to coil them up as straight back as we can. Make sure they don’t rub against the wood on the side of the peg box.

Again, you might want to review the article about tuning the violin, which you’ll need to do to complete changing the strings!