Can you instantly play higher or lower when asked?  Some beginners start off with a sense of high and low on the fiddle that is visual instead of aural, and it can cause quite a few troubles. 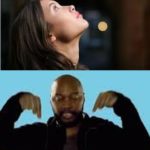 If you find yourself (or you have a student or friend) hesitating or reprocessing when someone says to play on a higher string, or to play a lower note than the one you’re on, you may find it really useful to rethink “high” vs “low”.

Some people start learning the fiddle visually, so they look down the fingerboard from the vantage point of their chinrest, and they see that technically the G string looks higher up than the E string. Don’t look! Listen! Clearly the G is lower sounding than the E, and that’s the only thing that counts.

One student I had was an architect, and he unfortunately started off by visualizing the violin as a building, with the tower being the neck. With this image in mind, the open strings were the higher floors of the building, and the notes closer to the bridge were the lower floors. Needless to say, this messed up his sense of higher and lower notes. He had to rid himself of that image and revisualize the instrument.

If you don’t revisualize and rid yourself of faulty imagery, you may find yourself wasting a lot of mental energy contradicting yourself, saying “well I think of the open string as higher than the first finger note, so I’ll just do the opposite of what I think.” We don’t have time for that adjustment! You need instant reactions to play in time and make corrections as you hear them.

“As you hear them” — that’s the key to it all. Make sure you’re basing everything on your hearing and not on what you see.

Practice scales often — one-octave scales as in Technique Video Group #4, which allows your ears to get used to going higher and lower, while watching the animated notes of the Finger Finder move along with you, so you can prioritize higher and lower, and know without hesitation that adding fingers makes higher notes, and that moving to a lower string, even with more fingers, is still a lower note.

I suspect some players have made to an intermediate level by working around this problem — if you’re one of them, stop and sort it out, and you’ll be glad you did! Always think sound, not sight, and you’ll be all right. (Hey, that one rhymes!)