The Orkney islands in the north of Scotland may be windswept and treeless, but they are also friendly and full of music. Hundreds of musicians of all ages gather weekly in the largest city, Kirkwall, to learn and play traditional tunes, and the islands, home to about 20,000 people, host music festivals in April (jazz), May (folk), June (classical) and September (blues).

Back in the early 1980s, when BBC radio decided to open a local station in Orkney, they were at a loss to play local music. Usually we take for granted that if people are playing music, we can hear it on the radio, but the truth is, the music has to be recorded first. In those days there was no recording studio in Orkney. 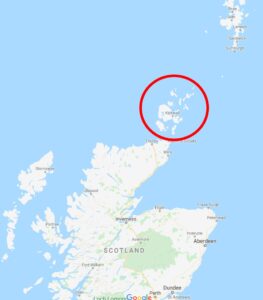 That’s when Attic Records, Orkney’s record label and recording studio, got started, and helped make Orcadian music known to the world. Its owner, Owen Tierney, a musician himself, owes the quality of his recordings to the generous advice of an expert in recording studios, who happened to be visiting his sister in her new job with the BBC Orkney radio station.  With expert advice in hand, Tierney used his attic to build a recording studio that is regarded as acoustically one of the best in Scotland, and proceeded to record local artists.

A 25th anniversary compilation called Gems from the Attic highlighted some of Orkney’s artistry, including the Wrigley Sisters, Ivan Drever, Douglas Montgomery, the Kirkwall City Pipe Band, Angus Findlater and others.

Jennifer and Hazel Wrigley are among the most famous ambassadors of music from Orkney, having toured the world as a duo, and also performed with the contemporary Scottish band, Seelyhoo. Jennifer plays fiddle, and Hazel guitar and piano. Their interconnected sound shows great musicianship, and maybe, being twins, that extra bit of sibling connection.

Some of their recordings include their eclectic Idiom, with traditional and original material, and Skyran, featuring tunes evoking Orkney folklore about local places, Pictish runes and tales of the little people, the trowies. Their Orkney After Sunset, in collaboration with storyteller David Campbell, includes traditional tunes mixed with mythical stories. Earlier Wrigley albums spotlight traditional Scottish playing with innovative jazzy rhythms on CDs such Huldreland and Mither o’ the Sea, and especially with their Edinburgh band Seelyhoo, which included Gaelic singer Fiona MacKenzie and the whimsical accordionist Sandy Brechin, plus drums and bass. One of their two CDs, Leetera, is still available on the Greentrax label.

After years of touring, the Wrigleys settled back in Orkney and set up The Reel, a shop, pub/cafe, and music studio where Jennifer and Hazel teach and help keep the traditional music alive with music sessions and music lessons taught by themselves and other instructors.

The gentle, compelling voice of singer and guitarist Ivan Drever took off from Orkney into the successes of the Celtic rock band Wolfstone. He often tours with one of Scotland’s finest fiddlers, Duncan Chisholm of the Wolfstone band and formerly, Blazin Fiddles. The best of Drever’s earlier songs from his Orkney years was compiled on two CDs available from Attic Records.

Ivan’s son Kris Drever grew up on Orkney but came into his own in the Scottish music scene with the bands Fine Friday, and currently LAU. Kris has a strong singing voice in his thoughtful and moving songs, and in LAU, works with top fiddler Aidan O’Rourke of Blazin Fiddles, and accordionist Martin Green in this dynamic trio. They won the 2008 BBC radio folk awards for Best Group.

About the same time that the radio station and Tierney’s Attic Records were organized, the Orkney Folk Festival began bringing top folk acts in from all over the UK and beyond. A few years later, in 1985, a 16-year-old fiddler from Shetland named Debbie Scott took the Orkneys by storm at that festival, and turned young people on to the excitement of traditional music. She was accompanied by master guitarist Willie Johnson and a jazz bass player. While in town, the trio popped over to Tierney’s studio and recorded a popular album on Attic Records, called Selkie’s Song. After taking time off to raise two daughters, Scott ultimately released a second album (self-titled) on the Shetland label, Veesik.

Helped along by the popularity of young Debbie Scott, and players and teachers such as Jennifer Wrigley,, increasing numbers of young Orcadians have taken to the fiddle there. It’s cool now for kids to play traditional music! The Orkney Strathspey and Reel Society coaches young players for an hour before its regular musical meeting and session on Thursdays in Kirkwall. The Traditional Music Project brings together up to a hundred young players every Saturday at music sessions led by a retired music teacher. The Fiddle and Accordion Club also meets weekly, on Wednesdays, though not with all the same people, since it’s nearly all accordions (it’s hard for a fiddler to get a note in edgewise among a bunch of accordionists!).

Some 75 recordings have been put out by Attic Records on Orkney. According to Tierney, many have been well supported by local residents. Interest by tourists used to be strong but has probably been dampened in recent years by internet habits. Attic hasn’t made it to the internet as yet but some of its offerings can be found at www.buyorkney.com, including a couple of Wrigley Sisters CDs, the Gems compilation, a recording from the Orkney Folk Festival, heartfelt songs by the late singer Angus Findlater, several dance band albums, the Ivan Drever compilations, a tour de force by fiddler Douglas Montgomery and multi-instrumentalist Stewart Shearer, Tierney’s band Hullion, and a recording of an excellent group of young Orkney fiddlers called Shoramere.

The leader of Shoramere is a Shetland fiddler, Jenny Keldie, who took the group back to Shetland to perform there, and surprised the Shetlanders with the musical quality of the young Orcadians. Shetlanders are known for their fiddling, and have a long tradition of preserving their own music thanks to the collection of recordings and teaching by the late Tom Anderson.

Orkney has had no similar traditional bearer for its native music. Like Shetland, it was Norse until 1472, but because Orkney is only ten miles from the Scottish mainland, its music has been dominated by Scottish music for as long as people can recall.

Orkney has always been a crossroads for culture.  We might not think of it as central these days, because we think about traveling by road.  But when the sea was the primary form of transportation, Orkney found itself dead center for sea routes between Norway, Greenland, Scotland, and continental Europe.  Its Neolithic culture is being uncovered more every year, revealing sophisticated structures rivalling the pyramids of Egypt and predating Stonehenge in the south.

One CD tries to simulate older Orkney sounds, though not specifically native melodies. It’s called Out of the Stones, by Bob Pegg and Bill Taylor of Ross-shire, who recorded musical sounds that might have been heard throughout 5000 years of Orkney history, using shells, whistles, drums, Pictish and Viking tunes, and a variety of harps, pipes, and songs. (A charred hazelnut shell from a human fire, found last year, appears to push Orkney’s earliest settled history back to 8500 years ago.)

For many generations, Orcadians have been entertaining themselves with music for listening and dancing. Fiddler Tommy Mainland is in his 70s and playing strong, often visiting the Orkney Strathspey and Reel Society meetings. He likes the three-tune sets they often play, and is happy to see the slow airs coming back into fashion. They’re not as easy to play as the quick reels, he points out. You have to have the feeling for it.

Tommy appreciates the Wrigleys, fiddler Douglas Montgomery of the duo Saltfish Forty, and other recorded Orkney artists, but says that there are lots of great musicians there with no recordings at all.

It seems the best way to really hear the music of Orkney is to brave the winds and a two-hour ferry ride, and experience the warmth of the people and their music first-hand.