The article below is from Ed Pearlman’s music columns in Scottish Life magazine. If you’re interested in a published collection of nearly 100 columns such as this one, please sign up here for info!

My perch atop the Glenfinnan Monument was surrounded by scenery, history, and music. In one direction I could see the soaring Glenfinnan Viaduct, with its 21 arches, and in the other direction, the waters of Loch Shiel cutting through wooded mountainsides. History stood right next to me in the shape of a giant statue of a kilted highlander. He is often presumed (falsely but plausibly) by viewers to be Bonnie Prince Charlie, for here is where Charlie landed, raised his standard, and gathered the clans to begin the uprising of 1745. 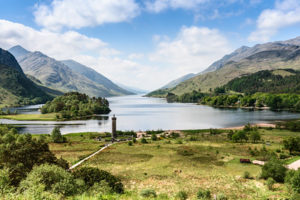 I couldn’t actually hear the music but knew it was taking place, less than 500 yards away, on the broad lawn of the Glenfinnan House Hotel. A long temporary tent had been set up by BBC Alba so they could film a ceilidh for a television special, featuring the Glenfinnan Ceilidh Band. No doubt they were playing Highland waltzes, schottisches, two-steps, barn dances, jigs, and reels, on fiddle, accordion, piano, and banjo, as can be heard on their 2010 CD, Glenfinnan Gathering.

One member of the band is fiddler Iain MacFarlane, who

actually grew up in the Glenfinnan House Hotel. His family purchased the house in the 1970s and fixed it up into both home and hotel. The house dates to 1752, just six years after its original owner, Alexander MacDonald of Glenaladale, was wounded at Culloden.

MacFarlane plays pipes, like many Highland musicians, but his main instrument is the fiddle. He learned to play from his father Charlie, and from the great Inverness-shire fiddler and piper, Donald Riddell. Iain was a founding member of the Blazin Fiddles band, which has toured internationally, giving the world a chance to hear that Highland fiddling is very much alive and well. His wife, Ingrid Henderson, not only plays piano with the Glenfinnan Ceilidh Band, but is also one of Scotland’s best traditional harp players. Her 2005 CD, The Little Beauty, highlights her virtuosic and lilting harp playing, as well as her accompaniment skills. In addition to their many other musical projects, Iain and Ingrid created Old Laundry Productions, converting the former laundry building of Glenfinnan House Hotel into a state-of-the-art recording studio.

A fine sampling of west Highland music can be heard on MacFarlane’s 2003 CD, First Harvest, with Iain MacDonald on pipes and flute. At the time, it was called by the Scotsman newspaper the “best traditional album of Scottish music to emerge in a decade from two of the foremost instrumentalists in the country.”  (For more albums by Ingrid and Iain, see link above for Old Laundry Productions.)

Iain MacDonald is one of three famous piping brothers who have had a major impact on Scottish music. They grew up in the Gaelic-speaking village of Glenuig, which is located on the coast about 20 miles from Glenfinnan. He played for many years with the folk bands Ossian, Wolfstone, and Battlefield Band, and is currently director of Ceolas, a summer school in South Uist which explores connections between the pipes, fiddle, song, and dance. In 2013, Iain was inducted into the Scottish Traditional Music Hall of Fame for his contributions to the music. Dr Angus MacDonald is a gold medalist piper who organized the first Feis (pronounced “fesh”) in Barra in 1981. The Feisen have grown over the years into a huge educational movement with over 40 annual events teaching music and Gaelic arts. Allan MacDonald, also an award-winning piper, teaches at the Piping Centre in Glasgow. He is particulaly interested in the intersection of piping, Gaelic song, and the music of pre-Clearance times when, as he says, “the fiddle and its counterpart of step-dancing were part of a dynamic matrix of song, instrumental music and social behaviour/ritual.” In 1990 and 2011, he published Music of Moidart , two books of original and traditional bagpipe tunes.

The MacDonalds’ village of Glenuig had no access road until 1968. Their district, Moidart, is the center of an area traditionally called the “Rough Bounds,” because of its remote and wild location. The area extends along the west coast from just north of Mallaig, south through Moidart, to the Sound of Mull.

Moidart stretches roughly from Glenuig to Glenfinnan, southwest along Loch Shiel to Acharacle, and out to the sea. The area’s history is very much present, whether in names such as Acharacle, recalling the defeat of the Viking Torquil by Somerled in 1120, or in ancient tales of the 8th century Queen of Moidart, whose army of female warriors cleared nearby islands from intruding missionaries. More recent events include Bonnie Prince Charlie, who is celebrated each August 19 at the Glenfinnan monument, where he raised the standard in 1745. A Highland Games is held at around the same time, concluding with a dance at the hotel. The history of the Highland Clearances of 1780-1850 also weighs heavily on Moidart, since a large percentage of the population emigrated, many of them to Cape Breton, Nova Scotia.

The relative remoteness of the west Highlands has helped keep many traditions intact, and may also have kept outsiders from knowing very much about those traditions. For example, Highland fiddling has continued, without fanfare, despite a common presumption that it died out in Scotland and survives only in Cape Breton. Similarly, it had been thought that Scottish stepdancing, a strong part of Cape Breton culture, died out in Scotland as a result of the Clearances, or possibly as late as World War I. But according to Allan MacDonald, Farquhar MacRae, the great box player and leader of the Roshven Ceilidh Band, used to call up stepdancers to show their steps at afternoon teas in Moidart as late as the 1970s.

The music of the west Highlands is rooted in Gaelic traditions of song, piping, fiddling and dancing. Tunes are traditionally played with a light, rhythmic style suitable for dancing, and in addition to the Scots Gaelic repertoire, there is also an Irish influence, in part because for many years, the only radio reception available in many areas was Radio Athlone from Ireland. Few songs are known to have originated in Moidart, but one of the most famous was written by Father Ranald Rankin for the children of Moidart before he and his parishioners emigrated to Australia in 1855. Translated from the Gaelic as “Christ Child’s Lullaby,” its haunting melody can still be heard at midnight masses in the Hebrides, online, and on several recordings, most notably as sung by Irish singer Christy Moore on the Boys of the Lough album, Midwinter Night’s Dream.

All these Gaelic, Cape Breton and Irish influences can be heard in the music of the Moidart-based band, Daimh (pronounced “dive”, the Gaelic word for kinship). The band’s first album, Moidart to Mabou, calls to mind the Moidart/Cape Breton connection, as well as the fact that the band’s piper, Angus Mackenzie, is a Gaelic speaker from Cape Breton. The band’s fiddler, Gabe McVarish, grew up in California, his family having immigrated to America via Canada, from the village of Morar, just north of Moidart. Ironically, after studying with Highland fiddler Angus Grant, Gabe ended up living in the same village his family had emigrated from. Other band members include local guitarist Ross Martin, and musicians from Loch Lomond and Glenelg. The band’s full and energetic sound can be heard on four albums, and at festivals and venues all across Scotland.

Today’s visitors to Moidart and Morar can enjoy Thursday night traditional music sessions at the Glenfinnan House Hotel, where there might even be a song, story, recitation or someone dancing on a table. Sunday afternoon sessions in Lochailort are not far away, along with sessions in Arisaig and Mallaig. Several festivals make themselves felt in addition to the Glenfinnan Highland Games in August, such as the Blas Festival in September, and the Mallaig’s Feis na Mara in October. There are some pub sessions around, but historically the music making in this area took place in halls and homes. In the old days, pubs that hosted music were considered morally suspect!

As you marvel at the beauty of Loch Shiel, climb to the top of the Glenfinnan Monument, or listen for the chugging of the Hogwarts Express across the Glenfinnan Viaduct, keep your ears out for the some of the exuberant traditional music of the west Highlands taking place all around you.