Here’s how to have a happy new year — kick it off with a year-ful of jokes! 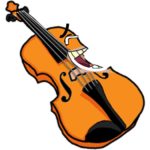 Did you hear about the farmer who played fiddle out in his cornfield? It was music to his ears.

What muscles do you use most when you cross a fiddle with a pig? The hamstrings.

How do you end up with a million dollars playing the fiddle? Start with 2 million.

The fiddler asked his friend if she’d heard his last show. She said, “I hope so!”

The boy told his mother, “When I grow up, I’m going to be a fiddler.” His mother said, “Honey, you know you can’t do both.”

How do you protect a valuable fiddle? Hide it in an accordion case.

When is a fiddler considered successful? When his wife has a really good job.

St Peter welcomed three new souls to heaven. “What did you each do in life?” he asked. The first said she’d made a lot of money on the stock market but given nearly all of it to charity. The second told how he’d won a lottery and funded a soup kitchen. The third one was silent. “And what did you do?” asked St Peter. The third soul said sheepishly that she wasn’t like the other two–she’d only made $10,000 in her whole life. “My goodness,” said St Peter, “What instrument did you play?”

How do you know there’s a bodhran player beating at your front door? The knocking is in triplets and he doesn’t know when to come in.

What is the difference between a violin and a viola? The viola burns longer. Why? Because it’s usually still in the case.

Marriage is like playing the fiddle. It looks easy until you try it.

How can you tell if a fiddle is out of tune? The bow is moving.

What’s the definition of a gentleman? Somebody who knows how to play the accordion, but doesn’t.

What’s the definition of perfect pitch? When you throw an accordion into the dumpster without touching the sides.

What’s perfect pitch for a banjo player? Tossing it into the dumpster without touching the sides, and right on top of the accordion.

What do you call a drummer without a girlfriend? Homeless.

Harpers spend half their time tuning and the other half playing out of tune.

How many musicians does it take to screw in a light bulb? Six. One to actually screw the bulb in, and five to say, “Oh,I can do that.”

Why do bagpipers always walk while they play? To get away from the noise. Plus, it makes them harder to hit.

What’s the best thing you can learn on accordion? How to fold a map.

What’s the difference between a cello and a buzz saw? Vibrato.

How do you play a note in tune on the fiddle? Either put your finger in the right place or use vibrato.

How do you get a banjo player off your front porch? Pay her for the pizza.

Why do so many people hate the bagpipes the first time they hear them? Saves time.

Why are there no banjos on Star Trek? Because it’s the future.

Did you hear about the time the guitarist locked his keys in the car? It took him two hours to get the drummer out.

What did the drummer get on his IQ test? Drool.

How do you know the stage is level? Because the drool dribbles from both sides of the banjo player’s mouth evenly.

How is it that fiddlers can play like lightning? Because their fingers rarely strike twice in the same place.

How do you get two whistle players to play like one? Give one of them money for a drink order.

What’s the range of a banjo? About 20 yards, if you have a good arm.

How many bass players does it take to change a light bulb? None. The pianist can do it with his left hand.

Why was the bass player so mad at the fiddler? He accused the fiddler of turning one of the bass pegs out of tune, but wouldn’t tell him which one.

What do you call a guitarist who only knows three chords? Professional.

What do you call a guitarist who only knows two chords? A music critic.

How do you get a guitarist to play quietly? Put sheet music in front of him.

How is an accordion like a law suit? Everyone’s happiest when the case is closed for good.

What do you call the guy who’s always hanging out with the musicians? The drummer.

Why did the drummer audition for the play? She wanted to learn to play a dramatic drum role.

Why did the musicians bring a chicken to rehearsal instead of the drummer? Because she already had drum sticks.

Why are drummers hard to talk to? Because they always beat around the bush.

What does the guitarist usually say at her gig? “Would you like fries with that?”

What’s the difference between a puppy and a folk singer? The puppy stops whining after a few months.

What is the difference between a guitar and a tuna fish? You can tune a guitar but you can’t tuna fish.

What do you get when you cross a chicken with a guitar? A chicken that makes music when you pluck it.

What did the guitar say to the guitarist? “Why don’t you pick on someone your own size. “

Why was the guitarist so stressed? He was strung out.

Why is it surprising that fiddlers don’t get stressed out? Because they’re so high strung, and yet they never fret.

The harmonica player got arrested three times for practicing. He liked to hold his harmonica out the window while driving.

What do you get when you drop a piano down a mine shaft? A flat minor.

What do you get when you drop a piano onto an army base? A flat major.

What do fiddlers usually eat with? A tuning fork.

What do you call a laughing piano? A Yamahaha.

Why did the pianist like to tie up bunches of carrots and potatoes with bungis? She was fascinated by root cords.

What do trumpet players and pirates have in common? They’re murder on the high C’s.

How many altos does it take to change a light bulb? They can’t get up that high.

How many prima donnas does it take to change a light bulb? One. She takes hold of the light bulb and the world revolves around her.

How do you know when the singer is at the door? She can’t find the key and doesn’t know when to come in.

Three quarter notes went into a bar. It was waltz time.

(Got some favorites you didn’t see here?  Add them in the comments!)

Have a happy musical year!

2 thoughts on “A Year-ful of Laughs”