The article below is from Ed Pearlman’s music columns in Scottish Life magazine. If you’re interested in future publication of a book containing nearly 100 columns such as this one, please click here and check off your interests, to be kept in the loop.

If you drive seventy miles north from Inverness, you come to the border of Caithness, the northernmost corner of mainland Scotland. Within another hour you can reach the rest of Caithness – the capital city of Wick on the east coast, or Thurso and John o’Groat’s on the north coast. Sutherland lies to the south and west. Historically a difficult place to make a living, Caithness is nevertheless a source of much joyous and sweet music. Often it seems that people in the toughest places create the happiest music. 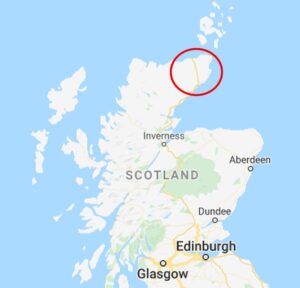 Think of the hardship of living in Badbae in the old days, when during rough weather, children and animals were tethered so as not to be blown off 200-foot cliffs into the sea. Or imagine working as a herring girl in Whaligoe, packing your creel with fish from the boats, carrying it up 330 steps cut into the cliffs, and walking eight miles to the market in Wick. In the 19th century, Wick’s harbor was packed with over a thousand fishing boats on a bay that Robert Louis Stevenson called the “baldest of God’s bays.” He wrote of watching the Wick fishing fleet put out to sea “silently against a rising moon,” strangely and beautifully turning the horizon into a forest of sails.

And yet the rugged, treeless beauty of the Grey Coast has produced some wonderful music. (Perhaps not coincidentally it has also provided fine whisky as well! Wick’s Old Pulteney distillery was named World Whisky of the Year in 2011.)

Those who view Scotland as centered in Glasgow and Edinburgh might think Caithness to be far from the mainstream, but in the days of the Vikings, when long-distance travel was by sea, Orkney was a central hub, and Caithness, only twelve miles away, was within easy reach. By the time the Norse arrived in Caithness in the ninth century, the Picts of the kingdom of Cait had been living there for eight centuries. The Norse called the area the headland (“ness”) of the Caits, or Caithness. But even the Caits were newcomers in an area where burial cairns of past inhabitants date to 5,000 years ago.

Many place names and family names in Caithness come from the Norse, including the popular name Gunn. Neil Gunn, who grew up in Caithness, was one of Scotland’s most influential 20th century novelists. In 1937, Gunn sailed the west coast of Scotland and wrote about it in Off in a Boat. In 2014, multi-instrumentalist Mike Vass (another Scottish-Norse name, in this instance from Nairn) recreated Gunn’s voyage by sea and in music, composing a suite of music which fuses acoustic folk with atmospheric and evocative riffs on keyboard, oboe, fiddle, guitar and other instruments. Called In the Wake of Neil Gunn, the project was performed at the Celtic Connections festival, on tour, and on CD.

Also in 1937, Neil Gunn published Highland River, a novel about the effect of World War I on Caithness. A project by Wick fiddler and composer Gordon Gunn (a distant relation of the author), and playwright and poet George Gunn (no relation), will tie into celebrations of the novel’s 80th anniversary this year, featuring original songs, storytelling, a performance and a film centered around the beautiful strath of Dunbeath.

An earlier collaboration by Gordon and George Gunn produced The Musical Map of Caithness, a CD which alternates colorful narrations with original tunes and songs. The music, played on fiddle, keyboard, drums, and whistle, is sweet, driving, and rhythmic. In addition to being an interesting introduction to Caithness, the recording has proved popular in the primary schools, where children enjoy learning songs about home.

Gordon Gunn is one of Scotland’s finest fiddlers, and though based in Wick, he travels the breadth of Scotland to play and teach. He is a member of the great fiddle band, Session A9, and regularly teaches at the Plockton high school’s Centre of Excellence in Traditional Music, a 3-1/2 hour drive from home. He occasionally ventures beyond Scotland, this spring heading to New Zealand, and in August to Boston. In addition to gigs and teaching, Gunn also composes music for television, promotional videos, and radio plays.

Gunn’s Shoreside CD is a dazzling performance of traditional Scottish fiddling, with ideas from jazz and bluegrass sprinkled in. You can’t help smiling as you listen to him play from the heart. His latest CD, Wick to Wickham, spotlights strong and playful fiddling backed by two of Scotland’s top accompanists, pianist Brian McAlpine and guitarist Marc Clement.

A huge inspiration for Gordon and other kids growing up in Caithness was fiddler Addie Harper, leader of the Wick Scottish Dance Band. This band was one of the top touring dance bands in Scotland in the 1950s, 60s and 70s. They appeared frequently on BBC Radio Scotland, and made records for the EMI label. In addition to fiddle, Addie also played banjo and added the soulful sound of a Hawaiian guitar, which he would lay in his lap and strum with his left hand while stopping the notes by sliding a whisky glass along the fretboard.

Addie recorded dozens of albums and composed more than 70 boisterous and danceable tunes. Published in three tune books, his tunes explore playful or thoughtful ideas, many with a west coast feel. Some are quite well known, such as “Barrowburn Reel,” “John Keith Laing,” and the pipe march “Pipe Major Jim Christie of Wick.”

Addie’s childhood fiddle teacher, Margaret Henderson of Wick, taught several generations of Caithness musicians, including Addie Jr and Gordon Gunn. She also taught piano to Addie’s future wife, Isobel. Though focused on classical technique, Margaret made an exception for Isobel after catching her with a Jimmy Shand tune book in her bag! She agreed to go half and half between Scottish and classical.

Isobel started playing piano with Addie’s dance band in 1962. Addie passed away in 2002, but Isobel still plays and teaches keyboard and piano accordion. In January, she and Addie Jr were featured guests at the Skye Accordion and Fiddle Club. Addie Jr, meanwhile has made a living as a fiddler and accordionist, often playing with west coast accordionist Fergie MacDonald or with his own band, Addie and Friends. He also teaches at Caithness schools and in Skye.

A number of other excellent musicians have come from Caithness, such as pianist James Ross who joined the faculty of the Royal Conservatoire in Glasgow, and Jim Sutherland, who got involved in traditional music as a teenager well aware of Addie Harper and his Scottish dance music. Sutherland has gone on to a stellar career firmly rooted in Scottish music but embracing other folk traditions and styles as well. His True North Orchestra blends prominent members of Scottish symphonies, jazz orchestras, and folk musicians playing bagpipes, concertina and clarsach, to create an
orchestra that reflects a more Scottish sound. Jim has written music for more than 70 TV and film productions, including two songs for the movie Brave. He also directs and
writes for La Banda Europa, which includes 35 virtuoso musicians representing various European folk traditions.

Caithness may be tucked away in a northern corner of Scotland, and the Grey Coast may not be the easiest place to live, but Caithnessians have certainly contributed their fair share of spirited music throughout Scotland and beyond.