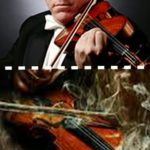 I’ve always noticed that the best fiddlers and classical violinists are good at everything, even if their styles differ. Their pathways to the top, though, expose very different priorities. Fiddlers tend to care most about these things, in roughly this order: timing, energy, bow articulation, expression, ornamentation, tone, intonation, clean notes. Classical violinists tend to care about roughly the same things, but in a different order: Tone, intonation, clean notes, vibrato, bow articulation, expression, timing, energy.

Two items are not shared between the lists. One is ornamentation, which is very important in fiddling, but it is written in for most styles of classical violin, and is executed the same as playing notes cleanly. The other is vibrato, which is essential to classical violin, but is used more as an ornament in fiddling. There is a little more blurring of the lines when speaking of baroque violin playing, where vibrato is also used as an ornament, and ornamentation is often improvised as part of the expression of the music.

In fiddling, timing is essential, and determines whether a fiddler can play for dancers, move the listeners, or play along with, or be listened to, at a session. Notes could be missed, as long as the beat (and preferably also the correct beat notes) are kept up. For classical players, tone and intonation are primary. I’ve heard some very good classical players who have

wonderful sound but imprecise timing. As a fiddler, of course, this drives me nuts!

Fiddlers usually feel the beat so powerfully that they move rhythmically while playing, tapping or pounding feet, sometimes both feet if sitting. Classical players restrain their physical rhythms to their bow, and to more subtle expressions such as breathing, swaying, or moving the head.

Bow articulation is one of the clearest differences between fiddling and classical playing. Classical players tend to focus on continuity of sound, maintaining tone, vibrato and clarity of pitch. Fiddlers often put a bite on their bow, digging in before starting a note, and drawing a quick bow to begin, then drastically slowing the bow down to allow for more time, sometimes even speeding it up again to lead into the next beat note. There is generally more expression within single notes in fiddling than in classical, and to do this, fiddlers tend to have looser wrists that are more responsive to these changes. Classical players tend to be cautious with the start of their bowstrokes, maintaining continuity of tone, while fiddlers often hit some beat notes with abandon, even using harsh sounds as a part of their expression. Some ornaments used by fiddlers are deliberately harsh and dissonant, such as minor second doublestop grace notes, to really emphasize the beats, or the grittiness of certain tunes. If you’re a classical player learning fiddling, you have to be willing to go there when it suits the tune!

Good fiddlers bring out a lot of expression in their playing, allowing their tunes to rise and fall and pulse with feeling and excitement. Classical players have lots of expression too, of course, but the focus on uniformity of tone quality sometimes leads classical players to pour expression into individual notes, while fiddlers are always aware of the overall momentum of a tune, making each beat lead to the next, and each phrase to the next. It’s almost as if classical players sometimes play for the beauty of the moment, while fiddlers are more aware of the function of the notes — the way grace notes emphasize beats, the way a pickup note makes the following beat note stronger. A violinist might play that pickup note beautifully in its proper place, while a fiddler might delay it or subvert it with grace notes that bring out the beat to follow.

One of the most obvious differences between classical and fiddle music is that classical music has longer formats, with longer explorations of melodies, and more varied experimentation with developing those melodies and arranging them with other melodies, changing keys, or rhythms.

In the place of such longer variations, fiddle music has texture. Sometimes a tune like “Crossing the Minch” can go through multiple parts with minimal changes in notes, and often classical players will think such tunes easy or boring, because they may not understand the effect of these tunes. I like to compare them to portrait paintings in which the artist works very hard to make the background have subtle, repetitive, and unremarkable colors so as to allow the portrait’s highlights to stand out sharply by contrast. Many fiddle tunes will use a repetitive pattern that serves like the background of those portrait paintings, so that when there’s a slight change in the reach of the melody or in the rhythm, it really stands out and creates excitement in the music.

Classical players have to be able to reproduce what’s written on a page, even though the best players often memorize and play without music. Fiddlers use written music as a skeleton to be fleshed out. A dotted-eighth followed by a sixteenth may well be played differently depending on the context — it may end up like a double-dotted eighth with a 32d note, or it may be flattened into a broader rhythm. None of this is arbitrary, though; it is always played according to the needs of the tune. In general, fiddling is played the way we might talk or sing, focusing on what we’re saying to convey effective timing, rather than following the (usually compromised) way the notes are written down. Swing jazz is an obvious example, where written eighths are actually played unevenly, almost as if in triplet rhythms. Most fiddlers rarely play notes evenly, as they like to weigh in on beat notes, and may need to speed up the non-beat note to get to the next beat on time. This kind of give and take is very expressive in fiddling, and cannot be written down.

Bow direction is often written down for classical players; if violinists are to be able to play in a chamber group or orchestra, they have to know how to play exactly what’s written in terms of both notes and bowing. Fiddlers develop an awareness of bowing the serves the power of the beat, often making sure that downbows land on the important beats, while other bows are adjusted to make way for the coming downbow beat.

Improvisation is the core of the classical violinist’s fear of fiddling but it’s not as necessary as they might think. Improvisation can be melodic, but is built around beat notes, or chords. It can also be purely rhythmic, and be built around bowing and expression, which may change from one time through a tune to the next. The skill of improv in a style such as swing jazz, where it’s built around chord progressions, can help improve any player’s abilities (and develop quite a few brain cells as well!).

The best advice I have to a classical violinist who wants to learn fiddling is to treat each style of fiddling as a foreign language whose culture, timing, accents, and priorities need to be listened to carefully so that the intent can be understood and felt, rather than merely imitated. It takes time, but is very rewarding.

One cultural difference to keep in mind is that fiddling is generally focused less on performing and more on providing a social function, such as playing for a dance, ritual, event, background music, or as participation in a social occasion such as a session.

One time when I played for a demonstration team of Scottish dancers providing some of the entertainment for a Boston Symphony banquet, I noticed Arthur Fiedler sitting there staring at my bow hand the whole time, and although I really felt that playing a violin for symphony players was like bringing coals to Newcastle, I asked some of the players what they thought afterward, and they told me they enjoyed it, and felt they could never play like that. They saw that there were some essential differences in timing, ornamentation, and bowing. I’m sure they were exaggerating, and could certainly learn the style if they wanted to, but it was a revelation to hear that such good violinists saw beyond the notes and the instrument that we shared, to appreciate the world of fiddling.

One thought on “Fiddle for the Classically Trained”