When we listen to music played or sung, ornaments are everywhere, but we barely notice. Stop and listen to a singer on the radio. Nobody sings without a slide or grace note note here and there, going into or out of a note. 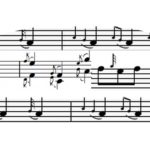 That’s because ornamentation is part and parcel of the language. The use of these musical decorations varies depending on the dialect (the fiddle style), but it fits right in effortlessly, at least when you’re listening to it. In fact, most people hardly pay any mind to ornaments until we actually try to play them. Then we wonder how it’s done, and if we’re looking at it on paper, we struggle with making those grace notes sound like the ones we’ve heard.

Grace notes are not only integral to musical language, they’re also built into the way we speak. If we write lyrics to a tune, each note could be a syllable. But the grace notes, triplets, and slides are the consonants. Let’s take a look at some examples of this.

To get started, we have to recognize that ornamentation, like clear playing or forceful speaking, depends on good timing. If we want to say to a child, “you better go to bed,” we won’t get much of a result if we mumble those words all out of time. To get a kid to go to bed we have to say it more like this: “You BETter GET to BED!” That way we’ve hammered out three equal beats, and fit in the other syllables around them. We won’t even say the “you” until we’re ready to say “BETter”, and we let the “GET” hang until it’s nearly time to say “BED”— then we toss in the word “to” before “BED”. In written music, it would look like this:

Notice that the three beats are all vowels. In fact, all beat notes in a song are vowels in the lyrics. And that’s how we speak, too. The consonants are the grace notes.

Say the words, “Let’s go eat.” There is a strong beat on the E in “eat”. Now say out loud, “Play the beat.” The beat is still on the vowel E, but there’s a B in front of it. Say those 3 words again and notice when exactly you put your lips together to form the B. It’s before the beat, isn’t it? Pretty far in front of it, really. That B is the grace note played before the beat.

Now say, “Let’s have a treat.” You get ready for the T pretty early and throw in the R too before you get to the beat on the vowel E. Two grace notes. Finally, try saying, “Go down the street.” That S gets started long before the beat, long before that E is pronounced. We stream in the T and R too. Three grace notes. And the timing is totally natural to us, countless times a day.

This is why grace notes are really natural for us to listen to. They’re just like consonants that come in just before the verbal beat, the vowel. Think of this when you learn to play grace notes. The timing is totally natural. It only falls apart when you try to analyze it too much.

Hearing the timing of grace notes may be natural, but learning the physical part of playing them requires some physical practice. This is especially challenging if you’re reading written music and trying to fit in those tiny notes that take up so much black ink!

Technique Video Group #5 on fiddle-online.com is set up for you to incorporate the elements of grace notes into your playing. Some grace notes are actually done with the bow (slow grace notes, video #1) and some with the left hand (quick grace notes, video #2) and sometimes these are combined without much effort but they sound very cool and look much more complicated on paper than they actually are to play (video #3). Other grace notes are also played with the bow (birls/cuts) but are on the beat, kind of like speaking a word with a growl or exploding consonant. Then there are the Irish rolls, which are also built on the beat and are best learned broken in two parts.

Check out these technique videos to gain new insights into how all these and more (slides, warbles, zipped note) are done. Most importantly, the videos give you practice making these techniques part of your physical and rhythmic repertoire, so you can use them where you feel them.

Because where you feel them is totally natural, like a part of speech. Which is exactly what they are.