In the last 3 posts we’ve looked at ideas for playing in tune.  Now we get to the part that has nothing to do with playing skills:  tuning the violin itself.  It’s kind of a necessary evil.  If you could have a self-tuning violin, and never learned how to tune it yourself, it wouldn’t affect your ability to play music.  (If you’re an inventor, get cracking!) 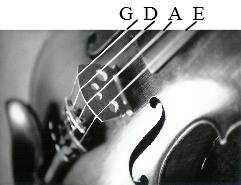 The most useful skill is to be able to tune your violin by ear, but even if you use an electronic tuner there are a few techniques everyone needs to know, so we’ll discuss both approaches — how to use the pegs and the universal ability to match pitches.  This is a pretty detailed explanation, so you may already know some of it; hopefully some of it will fill in some gaps or give you something to think about in a new way.

I once tried tuning a violin exclusively with an electronic tuner, and it took me a lot longer than doing it by ear.  The reason is that the eyes, and all the mental processing they require, are a lot slower than the ears.  This is true in tuning, in playing, in reading music, in watching your fingers, in watching other people’s fingers — sometimes the eyes just get in the way of muscle movement that’s going to happen with or without them, and other times the eyes just require more thought, attention, processing, to get something done, than the ears do.

Playing a violin that’s in tune is like starting on a level playing field.  If it’s out of tune, everything else has to adjust to make the music come out right, and that’s just not fair!

We’ll start by talking about the electronic tuner.  Your ears are hardly needed when using one of these gadgets.  You do, however, have to have a sense of how to use the pegs.  The basic idea is to make sure that when you pluck the string you’re tuning, the tuner displays the correct letter — G, D, A, E — but not G#, D#, etc.  You have to look for that tiny sharp sign to make sure you’re not a half-step off.

To get the string to the right letter, you need to use the peg.  Here’s some basic info useful for both tuning by gadget and tuning by ear: 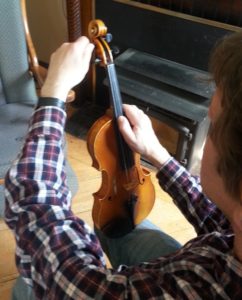 Place the violin on your knee, facing you.  Hold the peg for the string you’re tuning between thumb and finger of one hand, and place the other hand on the opposite side of the neck, resting against the neck and the body of the violin.  Never let go of the peg!  In some seasons, loosening it will allow it to unravel completely if you let go.  To loosen the peg slightly, turn it toward you (the top of the peg moves toward you) — slightly!  Like an eighth of an inch, no more.  This lowers the string’s pitch, lessening tension and slightly loosening the peg.

All tuning is done from below.  Once you’ve lowered the pitch by turning the peg slightly toward you, you can turn it away from you, tuning it up, just a little — but wait!  While you turn the peg up, push it in against the other hand while you’re turning it, kind of like turning a screw.  This way, the peg will stay put.  You can’t turn the peg first and then push it in, or it will slip while you’re pushing it in.

The best way to turn the peg up is to first pluck the string, using the thumb of the other hand.  Then immediately turn the peg up a little — you’ll have maybe 3 seconds to do this after you’ve plucked it, before the sound dies down.  In this way, you involve your ears in sensing how far you’ve turned the peg.  Otherwise you might turn it way up randomly, and could turn it so far as to break a string.

If using the electronic tuner, pluck the string when you’ve stopped turning the peg and see if it’s showing you the correct letter.  If not, try the process again, loosening and lowering slightly with the peg, and turning up again, and testing to see if you got to the letter.

Once you reach the correct letter, you can use the fine tuners at the base of the string, near the chin rest, to bring the pitch to the point on the electronic tuner where it tells you it’s really in tune by turning green or showing the needle in the center, or giving some similar indication of perfection.  This can change as you tune other strings so it’s a good idea to check each string again.  You have to turn the fine tuners about a quarter turn before you see much change on the needle of your electronic tuner.

Sometimes the “rational mind” doesn’t get the concept of tuning by ear, and tries to label you “tone deaf” or some such slander!  If so, consider the science of it:  Due to the physics of sound waves, anyone’s ears can know when two pitches match, when compared with two pitches that don’t match.  When the frequencies of two pitches are slightly off from each other, there is a clash of sound frequencies, a buzzing which you can sense even if you can’t describe it.    The frequencies of any two pitches, when played together, reinforce and cancel each other out at mathematical intervals.  Unison sounds only reinforce each other because they are identical and there is no extraneous noise.  Harmonic sounds like octaves or fifths reinforce each other at intervals that fit within their sound waves, so they give a clear sound.  The closer two pitches are to each other, the uglier the extraneous buzzing because the frequencies don’t fit together mathematically.  When suddenly we go from slightly out of tune to perfectly in tune, our ears experience a calm, as we hear two identical pitches.

People who think they are “tone deaf” are usually not really using their ears.  When someone who has trouble with singing in tune tries to match a pitch they hear by singing along, they usually start their vocal chords going and let the vocal chord muscles get comfortable with the sensation of vibrating, but they don’t know how to listen to the pitch they are singing.  However, if they slide pitch they are singing, higher and lower, their muscles no longer get stuck with one sensation and all that’s left is to hear the pitches, compare them to the pitch they are trying to match, and their ears know when the pitches match, as described above.

On the violin, this happens when you pluck the string and immediately turn the peg up slightly.  You’ll hear the pitch slide higher.  You need to be playing the target pitch while you’re doing this, so that your ears can try to match the sliding pitch with the target pitch.  When you think it matches, let go of the peg — which, as explained above, you have been pushing in like a screw against the pressure from your other hand on the opposite side of the neck, so that peg doesn’t slip after you’ve turned it.

By the way, on your personalized home page on www.fiddle-online.com there is a virtual pitchpipe you can use to play your target pitches for you.

The process is to slightly lower the peg, moving it toward you a tiny amount, like an eighth of an inch, then pluck the string with the other hand and immediately turn it slightly up as you hear the pitch slide higher.  Stop turning the peg when you feel you’ve matched or come close to the target pitch.
If you don’t think it’s a match — or if you’re not sure — do it again!  Lower the peg slightly, then pluck and turn up to do a better match.  Always approach the pitch from below.  If you go too high and keep trying to go higher, you won’t get to the correct pitch because you’ve already passed it, and might even break a string.  Keep in mind that professionals often take 6 or 7 tries like this before they’re satisfied that they’ve tuned the string properly.

Speaking of pros, they usually only use a target pitch for the A string, then they tune the other strings to each other, because the better you get at this, the easier to match fifths (neighboring strings) because mathematically they are very harmonic and easy to hear when they are in tune, though not as easy as octaves or unisons.

The only serious problem is if your string is way off, and turning it up slightly won’t get you to the right pitch.  Then you have to turn it much farther to get within range, before starting the process described above.  Whatever you do, always pluck the string just before turning the peg, so you engage  your ears in hearing how far you are turning the peg.  If you shoot in the dark by feel or by sight, you’ll have very little feel for matching the turning of the peg with the change of pitch.

Well, there you have it — a detailed description of the necessary evil we call tuning.  Now all you have to do is practice it.  The more you try it, the better you’ll get.  It’s not a rational exercise, it’s all about ears and muscles, just like much of playing the fiddle, so just doing it will improve your skill, whereas analyzing it isn’t likely to help very much.

While learning to tune by ear, it’s a good idea to check your tuning with an electronic tuner, just so that when you are ready to play, you have yourself a level playing field.