– from the Outer Hebrides tour

Allan grew up in the western Highlands in a musical family, and currently lives on Benbecula, between North and South Uist. He toured with the band Blazin’ Fiddles for 15 years, is a teacher, composer, and tells entertaining historical stories about Gaelic culture.  He is a well-known part of the music scene in Scotland, as are his siblings, harper/pianist Ingrid, multi-instrumentalist Ewen (of Mànran) and fiddler Megan (of Breabach).

Listen to the TradCafe interview of Allan

From the Isle of Harris, Iain Angus has played accordion for many a performance, ceilidh, and Scottish dance.  His ceilidh dance band produced a CD of dance music.  During the day, he pilots a boat from Harris to show people the islands of St Kilda.

See Iain Angus play on top of a car before a wedding barn dance! 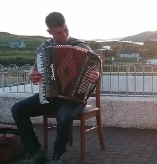 Born and bred on South Uist, Chloe has been surrounded by music and Gaelic since she was very young.  She majored in Bagpipes and Gaelic song, put out a solo CD in 2018, runs ceilidhs in South Uist, and teaches at the Feis.  In 2019, Chloe made her own film documentary, "Bann nam Baghasdal", showcasing the strong bond between two townships in South Uist and Cape Breton. 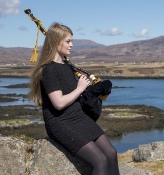